History and Background to ZCDC

The primary source of diamonds are Kimberlites and Lamproites, these occur as pipes and dykes from the earth’s crust. Only a small proportion of Kimberlites and Lamproites are diamondiferous. The Chiadzwa alluvial diamonds are a product of weathering and erosion of the primary source.
The weathered diamondiferous material was transported by fluvial processes and deposited in the shallow basin in Chiadzwa in the Umkondo sedimentary formation aged about 1 billion years old. The diamonds in Chiadzwa were carried from the primary source and deposited in basal conglomerate rock which is a secondary source /environment.
Subsequent weathering and erosion of the conglomerate rock further liberated the diamonds into a tertiary source where they occur in their natural state on slopes, paleo channels, low lying areas, streams and rivers. These diamonds in the tertiary environment are generally called alluvial diamonds.
Alluvial diamonds are relatively easy to mine as only excavation, hauling and processing is involved. There is no need to drill and blast the host rocks to liberate diamonds. In layman’s terms, alluvial diamonds are “the low hanging fruit” in diamond mining due to the simplistic mining and processing methods that can be used to recover them.
Alluvial diamonds were first mined in Marange in 2006 and in 2009. Eight companies were issued with Special Grants to mine diamonds in Marange and in Chimanimani.

History of diamond mining in Zimbabwe 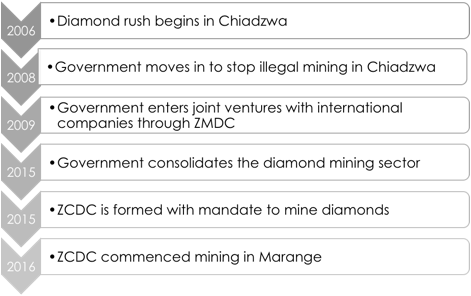 The Government’s objective was to ensure that there would be transparency, accountability and optimal commercial exploitation and marketing of Zimbabwe’s diamonds

When ZCDC commenced operations in February 2016 it continued from where the former miners left off, processing alluvial deposits from various concessions (Portals). Using modern X ray recovery technology, the company was able to recover diamonds from processed material while looking for new areas to mine. As the operations progressed it became apparent that the rich alluvial deposits had been mined out and the remaining deposits were becoming increasingly uneconomic to mine with high stripping ratios. With the depletion of rich alluvial deposits, the company managed to produce 961,537 carats in 2016.

Through the implementation of a carefully deliberated and crafted Diamond Mining Business Model (DMBM), the company presented a strategic business plan to its shareholder and subsequently received capital to invest in a sustainable mining model which would usher in conglomerate mining.

Sustainability entailed mining for the benefit of both current and future generations, promoting diamond mining for posterity. It compelled, expansive evaluation and exploration for sustainable Conglomerate and Kimberlitic mining, feasibility studies on exploration to have turnkey projects for sustainable mining in greenfield concessions and building confidence levels to have bankable diamond reserves and mining plans, investment in new technology in mining, processing and evaluation and creating self-financing capacity for futuristic and sustainable diamond production.

Towards a sustainable mining model

In line with the dictates of the DMBM, in the second quarter of 2017, the ZCDC Board approved investment into a 450 tonne per hour conglomerate processing plant to be installed at Portals (A & B). The total investment was $15 million.

As part of Plant design optimization comprehensive metallurgical rock crushability tests were carried out on all mining concessions. The tests are an important part of Diamond Value Management (DVM) as they minimize the damage of diamonds during recovery which affects the value of rough diamonds. The results will also enhance further understanding of the depositional environment and potential source of the diamonds.

As inscribed in its DMBM, ZCDC will implement a mining sustainability strategy which is aimed at opening new mines. Two more mines will be opened in 2018 to complement production at Chiadzwa and Chimanimani. Extensive investment has been made in exploration and resource evaluation to discover and validate new diamond discoveries across the country. Work has already begun in various areas with reported diamond discoveries.

Investment in exploration and evaluation is key in building resource confidence and generating feasible mining plans to guide mine planning and business optimization which are informed by confirmed resource statements. This minimizes capital at risk and enhances shareholder value.

ZCDC owns ore resources that are mainly in the inferred category which require further evaluation to upgrade to indicated and measured category. At the same time the company needs to explore for new additional ore resources to open new mines and increase production. As such the company has embarked on a structured and intense exploration and evaluation exercise for short term, medium term and long term projects in line with the Diamond Mining Business Model.

ZCDC invested $7.1 million towards exploration and evaluation and has targeted over $2 million in 2018 to create a balance sheet of proven bankable reserves

Exploration is underway across Zimbabwe in search of kimberlite pipes.